You are here: Home > Information Centre > A Brief History of the Underwriters Laboratory

The Underwriters Laboratory, more typically referred to simply as UL, publishes a wide range of standards in the fields of Product Safety, Verification Services, Life & Health, Knowledge Services and Environment. They also perform rigorous testing to ensure products meet those standards, providing consumers with an independent assurance of quality and safety.

UL came into existence when William Henry Merrill opened the Underwriters’ Electric Bureau in 1894. The company performed their first product test in March of that year. Electrical products formed the core of the company’s interest in its early years, with tests being performed on circuit breakers, fire alarm boxes, fuses, heaters and junction boxes.

In 1903, UL published its first safety standard, which gave specifications for the construction of Tin Clad Fire Doors and Shutters. UL continues to publish renewed and updated versions of this standard to the present day. In 1905, the company certified the first set of coloured Christmas tree lights, as well as the first fire extinguisher. Improving fire safety was very much a driving force behind UL’s work, and in 1913 they began testing construction materials and wall panelling. In 1919, in conjunction with several other organizations, they published a landmark report on the effect of fire on building structures.

The first UL standards relating to record protection equipment such as safes and filing cabinets were published in 1918. These standards tested the fireproof capabilities of the unit and/or its ability to protect its contents from theft. The modern day equivalents of these standards are UL 72 (fire resistance) and UL 687 (burglar resistance). The first UL certified anti-burglar safe was released in 1923, while Sentry Safe claim to have built the first UL certified fire resistant safe in 1955. 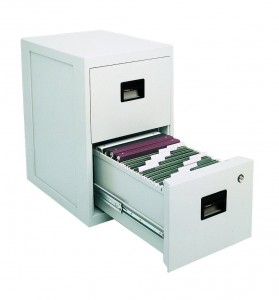 The Sentry 6000 carries a 1 hour UL rating for fire resistance.

Over time, UL continued to expand into many industries, testing and certifying a wide range of electrical appliances, as well as car seatbelts, bullet-resistant glass, smoke alarms, life vests and more. Television twice came under the scrutiny of UL, once in the 1950s when picture tubes where prone to dangerous implosions, and then once more in the 1970s when over 10,000 reports of picture tubes bursting into flames were investigated.

In 1985, UL issued its 500th Standard, UL 1459. This was the first standard for Telephone Equipment. By the 1990s, the UL mark had become so prestigious that UL was forced to introduce an anti-counterfeiting hologram to its labels to prevent untested products being sold to unwitting customers.

In 2011, UL tested and evaluated almost 87,000 items. Some 22.4 billion UL marks appeared on products in 104 countries around the world. The company now publishes 1,464 standards all of which are updated constantly to reflect new technologies and best practice guidelines. When a product carries a UL mark, you can be sure that it provides the quality you require and that it meets the highest specifications.

For more information about UL, as well as access to a full directory of all companies and products that carry a UL mark, visit their website.